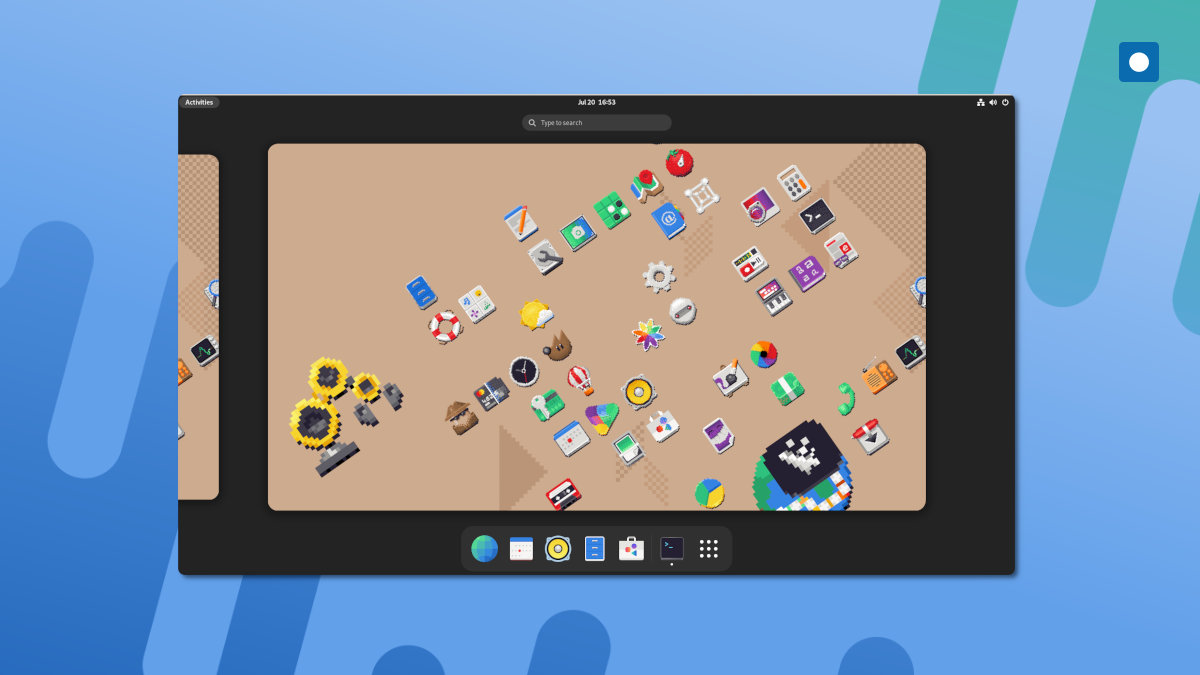 Treat your eyes to the shiny new GNOME 43 (Alpha) feature.

If you were waiting to experience the new features and updates in GNOME 43, then it’s time. The GNOME release team announced the GNOME 43 Alpha today with a vast list of updates, bug fixes and many core changes.

GNOME 43 development picks up where GNOME 42 left in terms of GTK4, libadwaita port of Shell and core native apps. With GNOME 43, the GTK4 port is almost concluded.

GNOME 43 Features (as of Alpha release)

First and foremost, let’s talk about the Files which comprise most of the visual changes in GNOME 43. For the first time, Files with GTK4 arrive (it was not ready during GNOME 42 release), and it will change your workflow for good. Let’s talk about it.

The Emblems arrive again as tiny square icons in GNOME Files. These icons give a hint of read-only, symbolic links and permissions. For example, a lock icon means you do not have permission to write over that file or directory.

The emblems follow the native theme of GNOME and adapt with an accent colour. In addition, multiple emblems are also allowed, and they are all visible in all the view modes (grid, list view).

Other notable changes in Files include – The Trash icon now having a Properties menu on right-click and an empty trash option. Also, the Other locations get the Properties context menu. The drag and drop works like a charm across workspaces and apps.

However, the much-awaited rubberband selection feature & tree structure display of folders/files in the list view is yet to be merged, and I hope it arrives before the final release. This is under MR187, and the status is open as of writing this.

Furthermore, there are a couple of interesting changes in Files that are still in progress, targeting this release:

Finally, the preference gives you more control over how you can customize the Files with their default view and functions. I like the way it’s designed.

Note: There is another merge request which supposed to autohide the sidebar of Files when the window is smaller; this responsive view is somehow not working in my test. Probably a bug; not sure.

Enough of Files. Let’s talk about one exciting change in GNOME Web, aka Epiphany. Perhaps the most crucial change is that Web now supports WebExtension API. That means you can easily download and install Firefox and Google Chrome extensions.

All you have to do is download the extensions as xpi or crx file from Firefox Add-on or Chrome Web Store. Then go to Hamburger menu > Extensions and click Add to install them!

It’s interesting to see Web gets a huge list of bug fixes and changes. Other notable changes include GTK4 porting works, an updated PDF library (PDF.js 2.13.216), support for “View Source”, and more.

I believe Web would be perfect for daily use by next year, provided WebRTC support via GStreamer.

In the settings window, mostly improvements and visual fine-tuning arrive in this release. The important change includes the “Dog Bark” sound in Alert is gone now as a result of some interesting conversation.

In addition, a new device security panel is introduced, and the TImezone map in the Date & Time panel is revamped.

The features that stand out in Software are some improvements to give you more information before you install an app or during the discovery phase. For example, a new section, “Other apps by the Author”, on the overview page gives you a list of apps available from the selected sources created by the same author.

Other than that, if configured, you may see an “Available for Fedora/any distro” section on the overview page and a detailed list of permissions for Flatpak apps.

That’s about the most significant visual changes in this release. Moreover, an extensive list of refactoring, bug fixes, and performance improvements lands in GNOME 43. I will cover this in detail in our traditional feature article of GNOME 43 once the code is a little stable and matured. So, stay tuned.

When GNOME 43 will be available in Ubuntu, Fedora and other distros?

Looking at the timeline & schedule, I am unsure whether Ubuntu 22.10 Kinetic Kudu can pull off, including GNOME 43.

Fedora 37 is going to feature this version for sure.

Rolling releases should get the testing version early once the BETA is out.

That said if you want to try it out, get the GNOME OS nightly copy from the below link. Remember it’s not a distro & try it in the GNOME Boxes Flatpak version only.

It’s good to see that the porting to GTK4 with libadwaita is finally concluding. It took more than a year of the colossal effort to migrate all the core libs and packages. If you do, try to report issues (if any) in GitLab.

So, what do you think about this release? Is it just the cosmetic UI changes? Also, are there any long pending issues you thought should be attended to? Let me know in the comment box below.

A news project by DebugPoint.com.

This site serves Ads by a third party that uses cookies and serves ads based on user browsing patterns.

Ideas and opinions expressed here are owned by the author and don’t necessarily reflect those of any other people or organizations.

All applications are registered trademarks of their respective owners. Icons and Logos are used for information purposes.